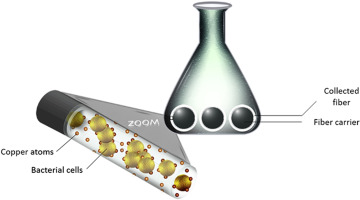 The ability to sequester or tolerate copper has been described for a number of bacteria. It was shown that Micrococcus luteus tolerates copper, and possible mechanisms of uptake for this bacterium have been proposed. Using a count live of M. luteus (CFU), 10% survived a copper concentration of 370 ppm. Maximum sorption capacity was 59 mg of Cu2+/g of dry cells at pH 6. Several proteins of M. luteus with copper affinity were identified by enrichment on a metal-chelating resin followed by LC-MS/MS to identify the metallome. Use of SEM/EDX showed how copper concentrated on the bacterial surface, whereas TEM indicated that copper was found also inside the cells. The enhanced capability of M. luteus to bind copper was tested using three configurations: free cells on an agar surface and cells encapsulated in alginate or in electrospun polymer composites. The latter showed the highest capability to bind copper (∼76 mg Cu2+/g dry cells). Such polymer composites may potentially be used in various water-based applications such as treatment of wastewater with a high concentration of copper or other heavy metals.